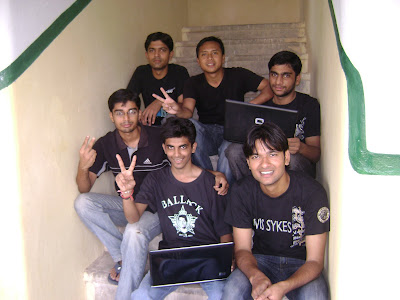 “IIT-JEE is not a difficult exam but an exam with a difference and so its aspirants need to do a Phd -level studies in order to crack it,” said Raghav Kansal of IT, BHU, who is leading the project.
He said that in fact all the aspirants need proper guidance and to make concentrated efforts. “During our preparations we had none to guide us but the coming generation of IIT aspirants will no longerface this problem. The e-portal “lakshyaiit.com” will help and support them at every step and in every possible way,” he said.

“The portal comprises of many features such as life at IITs, refuel yourself, tips by toppers, success stories, etc, which will be highly motivating to the JEE aspirants,” said the co-founder of this website Mohit Singh.

He said that also the portal was working on a unique discussion forum, which would be moderated by a team of IITians. This forum would serve as a platform for the JEE aspirants to discuss theirdoubts and problems directly with the IITians.

“After all who can understand the mindset and situation of IIT aspirants themselves who have been through the same phase,” he remarked.

“The best part is that all this will be made available to the students absolutely free”, said Malay Goyal, who is one of the cofounders of the site.

The team lakshya has also planned to launch a series of books covering the entire syllabus of IIT-JEE as some books have good theory, some have good set of questions and some have best papers and in other word none book is perfect in all the sections and topics.

“In addition, the biggest problem is that a very few good books are available in the market,which has exclusively been written for IIT-JEE and so to fill that gap we have decided to come up with a set of books which will have the plus points of all the books, integrated with the notes that the JEE toppers made during their preparations,” said Maghesh Kumar Singh, the head of the product development department adding that the first book of series is scheduled to be launched in January next.
Dr Subir Das of Department of Applied Mathematics, IT, BHU was also present on the occasion.
Photo caption: IITians, who launched e-portal for IIT-JEE aspirants, pose for group photograph in Varanasi on September 25, 2009.
Photo: Samrat
Posted by Ratna Modak at Monday, September 28, 2009

Email ThisBlogThis!Share to TwitterShare to FacebookShare to Pinterest
Labels: IIT-JEE