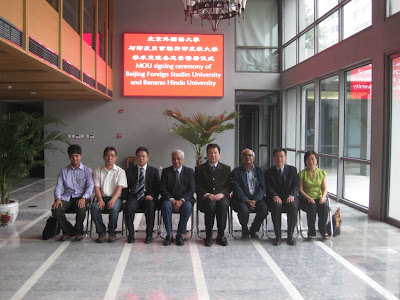 They were invited to strengthen the activities under the terms of MoU signed between BHU and BLCU for academic cooperation and exchange of students and scholars between the two universities in 2008.

The tour to was planned to initiate further academic activities with BLCU; discuss MoU with Beijing Foreign Studies University (BFSU) and explore possibilities of establishing academic exchange and cooperation with other leading universities and institutions of .

The president of BLCU, Prof. Cui Xiliang, convened a high level meeting with BHU delegation on September14 which was also attended by Dean, Director, Deputy Director and other officers. The BLCU agreed upon to provide necessary help in promotion of Chinese Studies at BHU.

The exchange of faculty members and students were also discussed in the meeting. It was decided that necessary guidelines will be formulated and both sides will help each other in promotion of language training and culture studies. The President of BLCU was invited to visit BHU.

A meeting was held between Prof. BD Singh and President of BFSU, Prof. Chen Yulu on September 16. The original draft sent by BFSU was reviewed and revised and the modified MoU for academic exchange and cooperation was signed. It was proposed that scholars and students from BFSU may pursue studies and research in Hindi and other Indian languages in BHU. They in turn may provide assistance in teaching of Chinese language and culture in BHU.

The delegation also visited various departments of , the most admired, prestigious and top ranking university in . The delegation met Prof. An Pingqiu, Head of Department of Classics, Prof. Gu Hongya, Associate Dean of the College of Life Sciences, Prof. Wang Bangwei, Head of the Dept. of Oriental Studies. All were keen to develop relationship with BHU.

The delegation also received expression of interest from where five students from BHU are enrolled there under scholarships for higher studies. The BHU delegation also visited China Institute of Contemporary International Relations- a leading think-tank organization and had discussions with Prof. Ma Jiali, Director and Prof. Hu Shisheng, Dy. Director of the and Southeast Asian Studies.

The delegation had fruitful and enlightening discussion with scholars like Prof. Chen Zhongyi, Zheng Guodong and others at the of Social Sciences. Scholars of Sanskrit Studies presented the whole of set of Mahabharata translated into Chinese to BHU. They expressed serious interest in ongoing interaction with BHU through a MoU.