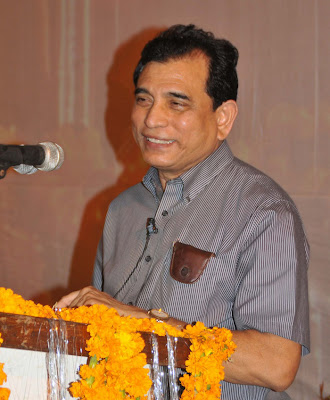 Varanasi, October 8, 2011: Padamshree Dr Lalji Singh, Vice Chancellor of Banaras Hindu University, has been invited to deliver a talk on “Genetic diversity in Indian populations and its health implications” in the Plenary Session of 12th International Congress of Human Genetics (ICHG) and 61st American Society of Human Genetics Annual Meeting scheduled to be held in Montreal, Canada from October 11 to 15.

This is most prestigious congress on Human Genetics usually held at interval of five years. The first congress was held in 1956 in and the last congress was held at during 2006. It is expected that the current Congress, the 12th ICHG will be attended by about 7000 human geneticists throughout the world. This is one of the very prestigious invitations particularly for an Indian scientist to give a plenary talk to such a distinguished gathering of human geneticists dominated by Americans and Europeans.

Dr. Lalji Singh is internationally known for his monumental work on human races & origin and its genetic basis. Prof. Singh and his group have undertaken the study on genetic diversity in primitive tribes of including the tribal populations of Andaman and . Through his work Dr. Singh has addressed few questions about Indian human races and its history: (1) Does the Indian subcontinent harbour more structure than ? (2) Has strong endogamy been a long-standing feature of Indian groups? (3) Do nearly all Indians descend from a mixture of populations, one of which was related to Central Asians, Middle Easterners and Europeans and probably lived in north ? (4) Are tribal groups systematically different from castes, and do some tribal groups provide a good approximation for the ancestral populations of ? (5) What is the origin of the indigenous Andaman Islanders?

His work indicates that the Andamanese have closer affinities to Asian than to African population and suggests that they are the descendants of the early Paleolithic colonizers of Southeast Asia – the hunter gatherers and the first migrants moved out of Africa about 60,000-100,000 years ago. These findings have revolutionized the ways of thinking about the origin of man in terms of their evolution and migration from place to place. His group’s recent work on Genetic diversity in Indian populations “Reconstructing Indian population history” was published as a full article in Nature in 2009 and it was also given on the Cover page of Nature. His publications provide strong evidence that the Aryan and Dravidian races in have the same genetic basis and have helped social scientists to talk about bridging the gap between North and South Indian people. The talk of Dr. Singh will have an enormous scientific impact as International Scientific Community will be eager to listen his work on “Genetic Diversity Studies of Indian Human Population and the Inference about Population Migration”. It will reflect on the issues of evolution of human population with respect to the origin and frequencies of genetic diseases in with over 4500 anthropologically defined groups, which comprise tremendous human genetic diversity and the relationship among those populations. These differences explain the basis of geographic, caste and other ancestral variations of human origin

The information generated by Dr. Singh has a great impact on Human Society. Keeping this in view Dr. Singh has established a Genome Foundation in Uttar Pradesh which is functioning with people participation and is utilizing the voluntary services of retired scientists and professionals. This foundation aims at controlling Human diseases and suffering based on genetic disorder, which are being transmitted from one generation to another generation. The problem of genetic disorders in is enormous. Indians are also genetically susceptible to common diseases, such as, diabetes and heart diseases. Thus, prevention of disability is the only option for these disorders. However, the diagnostic services for them are mostly focused to cater the urban .