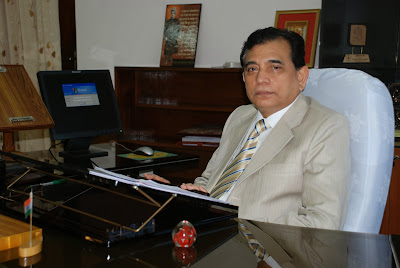 , December 16, 2013: vice chancellor Dr Lalji Singh has been nominated as a member of the Central Council of Health and Family Welfare of Government of India.

The Central Council, headed by the Union minister for health, will also have proposal for legislation in fields of activity relating to medical and public health and family welfare matters, laying down the pattern of development for the country as a whole. The responsibilities of the council also include examining the whole field of possible co-operation on a wide basis in regard to inter-state quarantine during time of festivals; out-break of epidemics and serious calamities such as earth-quakes and famines and to draw up a common programme of action.

The council would advise the government on policy matters regarding all aspects like the provision of remedial, promotive and preventive care, environmental hygiene, nutrition, health education and the promotion of facilities for training and research.

It will also make recommendations to the Central Government regarding distribution of available grants-in-aid for health and family welfare purposes to the States and to review periodically the work accomplished in different areas through the utilization of these grants-in-aid; and establishing any organisation or organisations invested with appropriate functions for promoting and maintaining co-operation between the Central and State Health and Family Welfare administration.

The Union Minister of State will be the vice chairman. The members include Planning Commission member, ministers of health from the States and Union Territories, two each members from Lok Sabha and Rajya Sabha, president of Indian Medical Association, president of Family Planning Association of India, president of FICCI,  and chairperson of Indian Council of Child Welfare. Secretaries to the Departments of Ayush, health, women and child and HRD,  ICMR director general, NACO director general and director general of health services (DGHS) will also be members of the council while economic advisor to the Ministry would be the member-secretary.