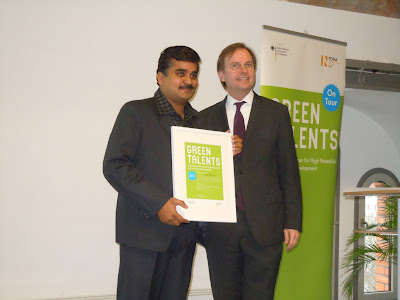 , : Dr Rajeev Pratap Singh of , who is presently serving an assistant professor at the and Sustainable Development, was conferred with Green Talents-2011 award in on December 15 last.
Federal Ministry of Education and Research (BMBF), gave away the award to 20 outstanding up-and coming scientists from all over the world. While giving the award Parliamentary State Secretary Thomas Rachel said this was the third time that the BMBF had selected the exceptional young scientist’s active in the field of sustainable development.
Research contributions of 331 young researchers from 58 different countries were analysed for the award out of which 20 were selected. Before the award ceremony in , the Green Talents were invited for a scientific journey across the as a part of a ten-day science forum hosted by BMBF.
PPP Cell-BHU
Posted by Ratna Modak at Sunday, December 25, 2011