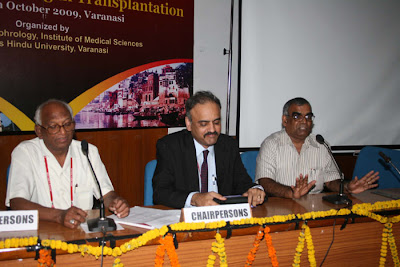 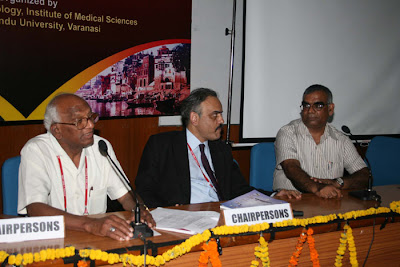 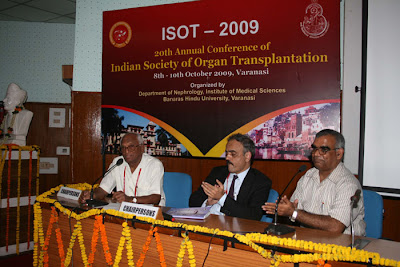 By Neelam Parmar
Varanasi, October 10, 2009:
India contributes less than one per cent in the medical world of organ transplantation.
This was revealed by the renowned doctors at the 20th annual conference of Indian Society of Organ Transplantation, organized at Swatantra Bhawan in Banaras Hindu University from October 8 to 10.

“Though, it an important break-through of the medical science, but at international level, India’s contribution is very less, only 0.8 per cent,” said a doctor.

There are different myths about brain death, whether it is legal or not was discussed in details. It may be mentioned here that life is not reversible once brain is declared death. The concept of brain death was legalized in 1985 in India. After brain death if a person is put on ventilator, other vital parts like heart, liver, lungs etc functions normally, the organs of brain dead person are the medically best suited for organ transplantation. Usually heart should be transplanted within 4-6 hours, lungs 6-10 hours, liver 10-12 hours, pancreases 10-20 hours, kidney 48-72 hours.

The conference reveals that about 60 per cent transplantation takes place in South and West India. Maharashtra, Gujarat, Tamil Nadu and Karnataka are well ahead of other states in this field of medical science. About 50 heart transplant has been done in India.

Kidney is most common organ being transplanted in India and abroad. Participating in the conference, Dr. Amitabh Gautam, Assistant Professor of Surgery, Section of Transplant, Boston University (USA), said there was huge demand of transplantation, particularly kidney in all over the world. He said major problem in kidney failure was that patients go to hospital with almost 80-85 per cent damage. The symptoms at initial stage were not observed, he added.
He said patient could live normally as other person after transplantation.

The conference observed that donors come from every section of society rich, poor, literate and illiterate. Doctors felt that people should be made to understand that organ donation is a great and noble cause.

Mohan Foundation based in the Hyderabad is doing wonderful work as they have motivated 8 families to donate organs and retrieved 16 kidneys, 4 liver, 10 heart valves and 36 eyes. The details are available on their website www.mohonfoundation.org.

At the valedictory function, president of society Dr. Bala Krishna praised the organizers and said it was one of the best scientifically organized and attended workshop in the recent times.

Interestingly, many of surviving cases which were operated in Institute of Medical Sciences, BHU, the donors as well as recipients were present in the workshop. The transplantation at BHU is being done by Prof. Jai Prakash along with Prof. PB Singh, Dr. US Dwivedi.