A rare view of Goddess Annapurna 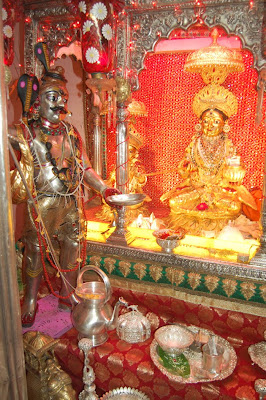 Gold idol of Goddess Annapurna which was brought out for ‘darsan’ of people at Annapurna Mandir near Kashi Vishwanath temple in sensitive Gyanvapi premises in Varanasi on the occasion of Dhanteras on October 15, 2009. The ‘darsan’ which started in evening continued till midnight which saw heavy rush of devotees thronging the temple to have a rare view of Maa Annapurna. The five-day festival which began in Varanasi two-day before the fetival of lights, Deepawali, is known as "Annakut".
Photo: Samrat
Posted by Ratna Modak at Saturday, October 17, 2009

Email ThisBlogThis!Share to TwitterShare to FacebookShare to Pinterest
Labels: Annakut