A moment of joy for traders 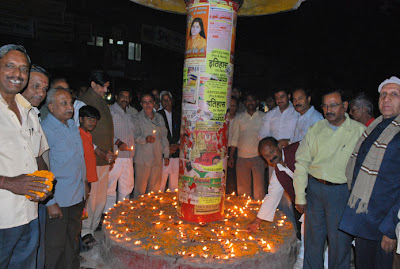 Traders celebrated the expulsion of state president of UP Udyog Vyapar Pratinidhi Mandal Banvari Lal Kanchal from Bahujan Samaj Party (BSP) at Chowk in Varanasi on Thursday evening (November 19, 2009). Most of the traders of Kashi Vyapar Pratinidhi Mandal were close to Mr Kanchal when he was in Samajvadi Party but when the latter joined the BSP they got annoyed. They welcomed his expulsion from BSP terming it as ‘right action against an opportunist.’
Photo: Samrat