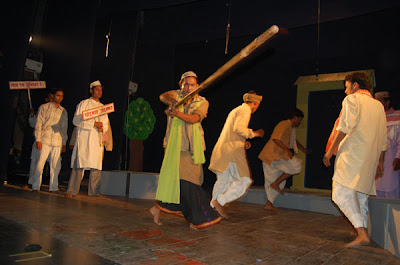 Artists of Prerna Kala Manch (PKM) broke the world record by staging 37 plays in 32 hours in one continuous marathon at Nagari Natak Mandali Auditorium in Varanasi on November 22, 2009 night.
"The Warp", written by Neil Oram and directed by Ken Campbell is listed in the Guiness Book of Records as the longest play of the world. It was a series of 10 plays performed in one continuous marathon. In this over 29-hour play staged in London in late eighties, as many as 30 artistes lived around hundred characters.
PKM is a theatre group of 11 actors, led by director and playwright Moti Lal.
Photo: Samrat
Posted by Ratna Modak at Monday, November 23, 2009