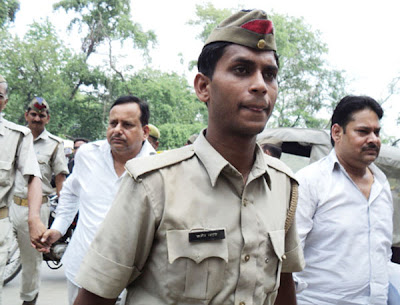 Varanasi, July 23: Former MP Jawahar Jaiswal and his brother Vijay Jaiswal were arrested here in connection with a land grabbing case, according to police.
The Jaiswal brothers were arrested after a probe found that they were involved in grabbing gram samaj land in Cantt area in Varanasi, police said.
Police said that on March 5 one Ajay Kumar Gupta lodged a complaint against Jawahar Jaiswal, Vijay and others as well as registry department staff alleging that they grabbed gram samaj land by submitting forged documents.
"On the basis of the complaint a case was lodged and during investigations the allegations were found to be true," said the police.
Photo: Samrat
Posted by Ratna Modak at Saturday, July 24, 2010

Email ThisBlogThis!Share to TwitterShare to FacebookShare to Pinterest
Labels: Crime