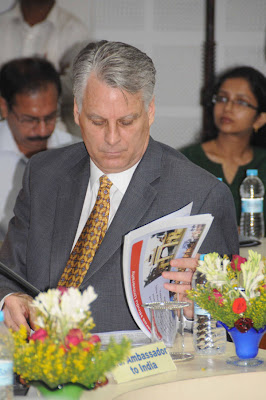 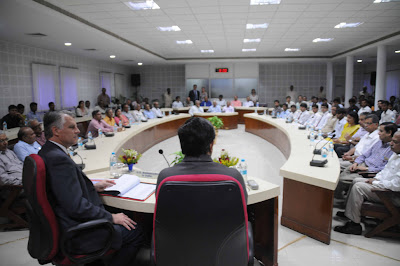 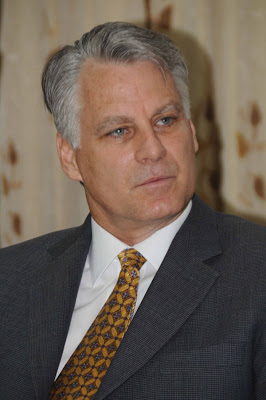 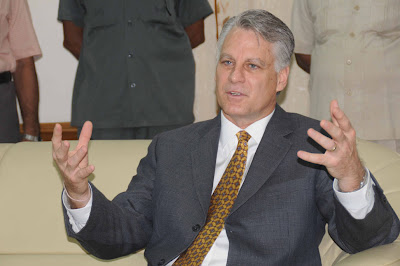 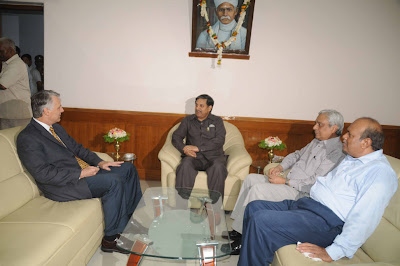 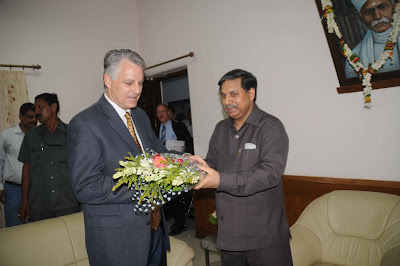 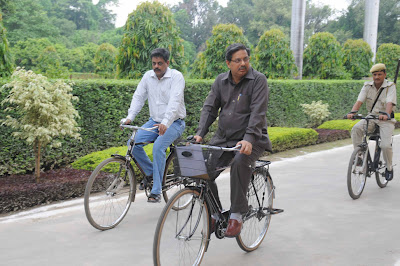 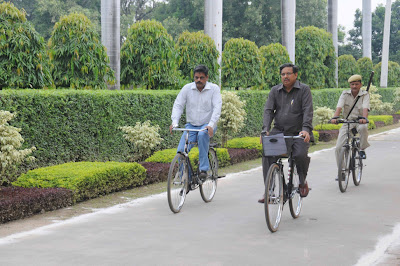 , : US Ambassador to India Timothy J Roemer visited on Tuesday and interacted with senior officers, teachers and a group of selected students in the committee hall here.

BHU vice-chancellor Prof. DP Singh rode bicycle to reach his office and met the ambassador as it was the last working day of month (Bicycle Day).

Vice-chancellor Professor Singh made a power point presentation to give a brief introduction about historical background, legacy, present and future status of the university. He also mentioned BHU getting top ranking in the India Today-Nielsen Survey and also figuring prominently in other newspapers and magazines.

Ambassador Roemer presented a book written by President Barak Obama to the BHU vice-chancellor. He said: “I am honoured to be in BHU which is manufacturing future work force of ”.

“I feel BHU is leading towards becoming one of the prominent universities in the world.

“US is not looking for a short-term relationship with but we are planning what relationship and US will have after 20 to 40 years”, he said.

He said two countries were closely formulating the plans and policies, which would lead to very strong US-India relationship.

Later addressing a small gathering the ambassador said: “We are concentrating as how to provide more and more opportunity of US-India relationship particularly in economic security, internal security and social security issues.

“ focus is shifting from to and in Asia India figures prominently”, he said.

He mentioned that he enjoyed coming to BHU as he is from family of educationists. “ I have traveled almost all the universities in US and enjoy the company of teachers and students”, he said.

He was inspired by lush green campus of BHU and compared it with prestigious universities.

He said he was impressed with the vice-chancellor Professor DP Singh’s presentation, which showed BHU’s exchange programme with prominent universities like and .

He hoped more and more such exchange programs would take place in future with US universities.

Reacting on the announcement by vice-chancellor regarding establishment of USAID office in the , is one of the significant steps.

He congratulated BHU for being selected to have this office among various Indian universities. This initiative of USAID will lead to formulation of an ‘Indian Agricultural Education and Innovation Systems Program’ which aims at improving agriculture education and agriculture extension programme in . This program will start from and will complete by .

While replying to some of the queries of students Roemer said US was looking for more and more opportunities for Indian students and scholars.

Email ThisBlogThis!Share to TwitterShare to FacebookShare to Pinterest
Labels: US ambassador Timothy J Roemer in Varanasi