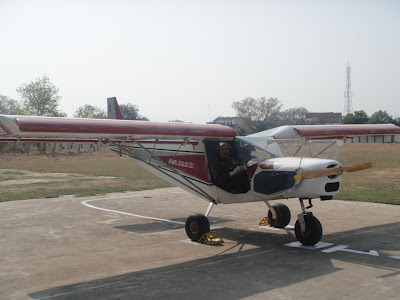 During his stay, he inspected 7 UP Air Sqn NCC in on Friday. Guard of honours was given to VIP by cadets of 7 UP Air Sqn. Unit carried out aero-modelling display, in which remote control and control line models were flown by air NCC cadets. Static models of fighter transport and helicopters prepared by cadets were also displayed.

Wg Cdr VP Agrawal said that 36 Air NCC cadets have participated in All India Special National Integration Camps held in Uttarkashi, , Gulmarg, , , Tamil Nadu and Kerala, which is a record for any NCC battalion.

“The 7 UP Air Sqn NCC is the only unit in entire Uttar Pradesh Directorate which has completed 200 hours of Microlite flying training for cadets of BHU and other affiliated collages of . Two of the SD cadets have joined NDA in Jan 2011”, he said.

During his visit, Maj General flew Microlite Zen Air aircraft along with Wg Cdr VP Agrawal the Captain of aircraft. This was his maiden flight sortie after resuming command of UP Directorate. ADG flew over city and saw Ghats of Varanasi.

He also expressed his satisfaction with their training methodology of training to Air NCC cadets. He addressed NCC cadets and motivated them to join defence services.

Email ThisBlogThis!Share to TwitterShare to FacebookShare to Pinterest
Labels: NCC