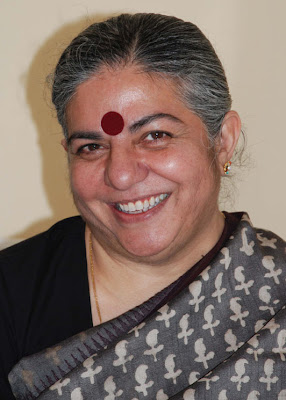 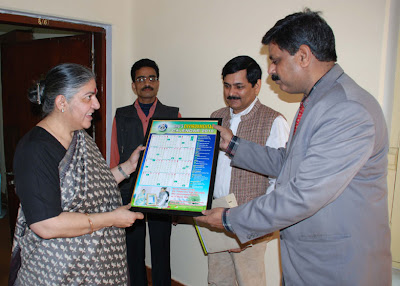 Varanasi, February 18, 2010: Renowned ecologist Dr. Vandna Shiva stressed upon the need to preserve our cultural and biological diversity and use it for benefit of our country.

She was speaking in a three-day seminar on “Population, Development and Environment: Issues and Challenges” began under the auspices of UGC in the Department of Geography, Banaras Hindu University.

Putting her weight against ‘BT Brinjal’ she said Union Environment Minister Jairam Ramesh, who was initially in favour of ‘BT Bringal’ but he turned against it because of public pressure.
She said ‘BT Brinjal’ test was coordinated by Indian Institute of Vegetable Research, Varanasi and hoped Banaras would come with natural and diversified Brinjal rather than GM Brinjal.


She mentioned about the Indian patent she fought and won in International court. Three famous patents were ‘A variety of wheat with high Gluten, ‘Basmati patent’ and Neem patent.


Vandana spoke against the prices being fixed by twisted subsidies and not by local market and farmers’ demands. She also mentioned how people in Delhi rejected modular ‘Daal’ which was sold @ Rs. 20/- against natural ‘Daal’ being sold @ 100/- per kg.


While mentioning the ‘Ganga’ she said that the “Thekedari” system should go from ‘Clean Ganga Movement’. Citizens of Varanasi and scientist of Banaras Hindu University should come forward to ‘Clean Ganga Programme’ for better result.


She said she had deep love and affection for one of the oldest city of the world-Banaras. She praised the city for maintaining its’ cultural heritage and tradition. She said Malviya Jee saved India particularly this part of country from invasion of the West during “British Raj”. He established “Capital of Knowledge”, Banaras Hindu University to create an independent knowledge system to match the knowledge of the West.

“Once Mahatama Gandhi said that I learnt ‘Satyagrah’ from people of Banaras, who refused to pay house taxes at the time of British Raj,” she remarked.


Prof. MH Quershi, the key note speaker, said environment comes first than come Population followed by development. He said things are decided by Nature rather than other things. “In the areas where there are good soil and water, we find more farmers in that area. The coastal areas have more fishermen. Mining areas have more miners,” he said.


Prof. BD Singh appreciated Dr. Bandana Shiva for her interpretation of vision of Mahamana Madan Mohan Malviya Jee. Prof. SC Lakhotia introduced about Science Faculty, Prof. MB Singh, Head of Geography Department briefed about the Department of Geography. The guests were welcomed by Dr. Archana K Rao and vote of thank was proposed by Dr. A.P. Mishra. The introduction of seminar was given by Prof. (Mrs.) TD Singh.